The Wedding Party by Tracey Richardson 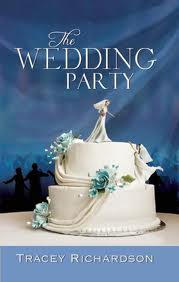 Dani is on the verge of marrying the love of her life, Shannon. She has planned a no expenses spared wedding in Vegas. No cost is too much to lavish on her bride to be and their guests. There is one problem though, Dani is hiding a secret from her bride to be. A secret that could mean the wedding is off.

Shannon is in seventh heaven, she is about to marry her lover of six years, Dani. Unfortunately all is not as it seems with Shannon. She has a secret that is eating away at her. A secret that when it comes out, as it must, could put an end to the love between Dani and herself.


Claire, a doctor and Shannon’s best friend, has been alone since the death of her lover Ann, three years earlier. Her life has been on hold grieving for her lost lover. She goes to Vegas, only because she can’t not be at her friend’s wedding. Once there, Claire finds a love that she isn’t sure she can accept, for several reasons.


Amanda, Shannon’s niece, is hiding a huge secret from her aunt. One that she knows must come out. Whilst in Vegas, Amanda finds love again, but will her love be reciprocated?


Jordan, Dani’s best friend. Her love ‘em and leave ‘em way of life over the years has resulted in her leaving a trail of broken hearts in her wake. She is a player. That is until she meets Dez in Vegas. Then the tables are turned. Jordan falls for Dez, only to get a taste of her own medicine when she is dumped. Will Jordan be able to change Dez’s mind?


This is a truly fabulous book. Each of these characters has a story to tell. I couldn’t put this book down. The book is a mixture of happy and sad, but the happiness shines through. The anguish felt by each character was superbly written. The cast of supporting characters throughout each helped in enhancing the story. It would be great to have a sequel or at the very least, meet some of the characters again in another book.