Survived By Her Longtime Companion by Chris Paynter 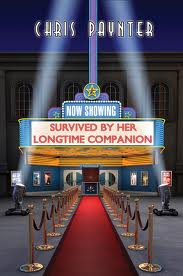 Bailey Hampton’s life has not been going too well. Her partner of nine years, Chelsea Parker, had walked out on her eleven months earlier. She moved from their home in Denver to Bloomington, Indiana. Neither Bailey or Chelsea cheated or had anyone else in their sights. They would both tell that their split was because they grew apart.


When Bailey is asked to go to Bloomington to interview Eleanor Burnett, (Ellie) longtime companion to the recently deceased movie star Daphne DeMonet, she at first refuses. It would be too painful to bump into Chelsea. Bailey is finally persuaded to take the assignment by top biographer and her friend, Joanne.


When Bailey discovers that Ellie has arranged the interviews to take place with her ex partner Chelsea, Bailey is devastated. How will she cope sitting there with Chelsea, with all the memories of their lost love flooding back when she still loves her?


The meeting is just as hard for Chelsea. Her love for Bailey has never died. It seems neither woman has been able to move on from their pasts.


Ellie is a canny old woman. She realizes there is a past between Bailey and Chelsea and she soon has both women admitting to their faults and failures and what went wrong in their relationship. Who was interviewing who here?


Ellie sets up a series of meetings where she has Bailey and Chelsea taking turns to read her old diaries containing the private lives of her and Daphne, spanning back over their sixty years together.


Ellie is hoping that Bailey and Chelsea will see the similarities between their lives and learn from the mistakes that her and Daphne had made.


Will Bailey and Chelsea know what Ellie is doing? Will they take on board the precious gift being given by Ellie? Or will it be too late for them to repair their relationship? They love one another, but is love enough?


First of all I have to say, this book is great. The story is well written and Chris has, in my opinion, done a lot of research. This is an epic love story between Ellie, longtime companion of Daphne and also the lost romance between Bailey and Chelsea.


Ellie and Daphne’s story is mainly told through reading Ellie’s diaries, dating back from the beginning of their romance sixty years earlier, until the end of their lives together. These diaries tell of all the ups and downs of lesbian life and the consequences of being gay in the movie world. They tell of the laughter and the tears, of happiness and betrayal, of love found and lost, of coming round in a full circle and love everlasting.


Ellie’s diaries are almost a book on their own. I got to know both Ellie and Daphne and to actually feel their emotional highs and lows. It was as if their emotions radiated off the page. Their story is both beautiful and sad. A story of a great unshakeable love spanning decades, a love that even when apart, meant they were really together.


The movie world along with all the scenic descriptions of both America and England had me imagining I was a part of their lives. I felt Ellie and Daphne were my friends.


The second story in this book is of the lost love between Bailey and Chelsea. In many ways their love story was similar to Ellie and Daphne’s. I could see where Ellie thought they could learn a lot from her and Daphne’s experiences. After all, a true love is love, whichever decade you are in or whatever age you are.


Chris has written this book with care and a great deal of passion for her characters that shines through. Not only did she practically write two stories, but Ellie is a Brit and some parts of the story takes place in England. Chris has also written Ellie’s dialogue using the British language.


I quite honestly think this is the best book Chris has ever written. I’ve read all her books, but this one simply tops them all. A definite re-read in the very near future.