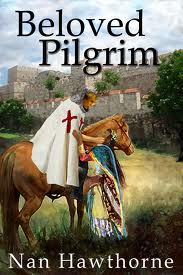 Elisabeth von Winterkirche, her twin brother, Elias and his gay lover and squire Albrecht, are leading a comfortable settled life with their frail mother. Elias and Albrecht are learning all the things to enable them to fight in the crusades and any other wars that may come their way. Elisabeth has also been surreptitiously leaning the art of warfare along side them too.

When their father returns from a four year absence, Elisabeth learns he has arranged for her to be married to a Baron Reinhardt. Elisabeth is against it from the start, but has no choice and nothing can be done. Once married, Elisabeth discovers her husband to be a spiteful, uncaring brute who only wishes for a child. Elisabeth is relieved that her parents won’t allow their marriage to be consummated until Reinhardt’s return from the wars and is delighted when he departs the morning after their marriage.


When Elisabeth’s mother dies, her father is grief stricken. He leaves their estate for the crusades. Meanwhile, Elias is taken ill and suddenly dies.


When Reinhardt returns and learns of Elias’s death, he claims their estate and riches for himself. Elisabeth is ill treated, abused and left a virtual prisoner when Reinhardt departs once again. Elisabeth and her only friend Albrecht feel they have no choice but to escape.


Elisabeth dons Elias’s clothes and with Albrecht posing as her squire, passes herself off as Elias and they go off to try to find Elisabeth’s father and to fight in the crusades.


On their journey, Elisabeth becomes aware that she is attracted to other women after spending a night with a prostitute. Fortunately, the prostitute is only too pleased to be with Elisabeth and keeps her secret safe. This night of passion is a turning point for Elisabeth. She knows she will only be happy with a woman as a lover.


Whilst on her travels, Elisabeth meets Maliha, a half Greek, half Turkish woman with a young son, she falls deeply in love and her love is reciprocated. But Elisabeth has to carry on with her pledge to fight. Reluctantly Elisabeth leaves her beloved Maliha and her newly acquired son behind. Will Elisabeth make it back unscathed? If she does, will she find Maliha waiting for her?


This book is bursting at the seams with scenic descriptions, excitement, history, adventure, war, fighting heroism and romance. It shows war at it blood thirstiest. The vivid descriptions are graphic and leave nothing to the imagination.


This is more than just another romantic novel about a woman passing herself off as a man to fight in a war. This is a story of discovery and ends in true love.


This book would make a fantastic film or at the very least a great TV series. I would love to see a sequel to this book.