Cool Side Of The Pillow by Gill McKnight 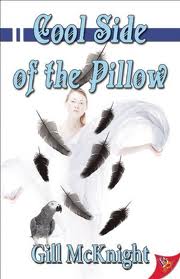 Clara Dearheart is an undertaker, but not just any run of the mill undertaker. Clara takes care of the dead and their families. But she also sees and talks to the dead. That is, all the dead except her dead partner Frances. When Frances died, she never appeared to Clara. Clara is at a loss to understand why Frances hasn’t visited her and she can’t move on with her life.


Bebe Franklin is a scriptwriter for a really bad TV soap series. She returns to Preston to look after her Aunt Arlene’s house and her deceased grandmothers parrot, Darling, while her aunt is away. When Bebe meets Clara, she feels an attraction for her and can’t understand why Clara rebuffs her every move. She has no idea that Clara is holding on to the past and her dead lover, Frances. Bebe doesn’t stand a chance.


When strange things begin to happen in Aunt Arlene’s house, Bebe begins to think it may be haunted. She is at her wits end.


Will Clara give up waiting for Frances to appear? Will Bebe get through to Clara? What will happen when Bebe discovers Clara sees and talks to the dead?


An extremely funny laugh out loud book, also with a serious side to it. The antics of the parrot, Darling alone had me curled up with laughter. A cast of characters that meshed well. The dead and the living really worked in well together. I think this is Gill’s best ever book yet. Definitely one to re-read.
Posted by Terry at 09:05