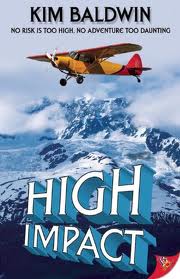 Courier Emery Lawson has had one near death experience too many. On her recovery she decides enough is enough. She gives up her job and decides to live her life to the full. She is going to travel the world. Part of Emery’s itinerary involves a trip to Alaska. On her arrival, Emery finds herself becoming part of a close knit group of friends. What Emery didn’t expect to find, was true love.

Pasha Dunn works for an adventure company. She has an uncanny intuition that kicks in every so often. Her intuition goes off the scale just prior to Emery’s arrival. Pasha has no idea why. When it becomes apparent that according to her intuition, Emery is Pasha’s soul mate, Pasha is dismayed. Emery is not relationship material. In fact, it appears that Emery’s lifestyle is beyond Pasha’s liking or understanding. Will there be a chance of love for Emery and Pasha? For that to happen, one or both of them will have to change.


Emery is booked on to a trip out and Pasha is one of the guides. The two women become closer. But Pasha is all too aware that Emery will leave soon to continue with the rest of her world tour.


Their situation comes to a head when a terrible accident forces them both to take a look at their lives. Will Emery and Pasha survive the accident? Will Pasha’s intuition be right? Is Emery her soul mate? Will Emery see what is in front of her?


This is another winning book from Kim Baldwin. A fantastic mix of adventure and romance. The story is a well written page turner. It was great to see characters from Kim’s previous books set in Alaska. Old friends and new friends meeting together for a new adventure. This is a standalone book. But you wouldn’t want to miss any books Kim has written. I look forward to Kim’s next book eagerly.
Posted by Terry at 15:59