A Fall to New Heights by Sidney Andrews 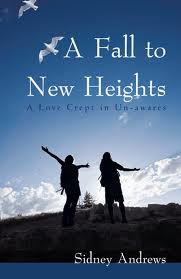 At the beginning of 1973, Sidney Andrews was happily married to her husband Bill and the mother of three children. In August 1973, Sidney met a perfect stranger. A stranger that would change Sidney’s life forever.


Sidney had married Bill when she was seventeen. They brought a nice ranch house and they both dearly wanted children. Due to a medical problem, Sidney wasn’t able to have children, so the couple adopted three children. Sidney and Bill were happy and living the American dream.


When Sidney’s friend Joyce set up a regular prayer meeting, she badgered Sidney in to attending. It was here Sidney met Kate. The woman that would eventually become her soul mate. Her one true love.


Sidney and Kate quickly became firm friends. Soon both Sidney’s and Kate’s families were spending time together, going on vacations, dining out, camping trips, they all got on great together. The more time Sidney and Kate spent together, the more they both began to feel for one another. At this point neither Sidney or Kate considered what their friendship and feelings actually meant.


After Kate had a miscarriage, the two women started up a business together, they opened a Christian bookstore. Gradually Sidney and Kate became more than just friends. At first they fought it, but love won through. What should they do? Would either woman be able to give up their family to pursue their love? After a lot of soul searching and trusting in their faith, they came to the conclusion, that love had to win through.


The journey they took after making that decision was harrowing, to say the least.


The emotional turmoil these two brave women suffered just radiates off the pages of this book. Way back in the 1970’s, things were so different from today. Although having said that, even today, some parts of the world are not tolerant of same sex relationships. Sidney and Kate faced homophobia, hostility and hardship. Both women had left everything to be together. Against all odds and with their faith they made it through to live the lives they deserve to have. To love the person they choose to love.


This book should be an inspiration to all women in the the same or similar situations. It is a story of great courage. A story that shows if you believe in what you are fighting for, you will win through. A true story of a true and everlasting love.
Posted by Terry at 15:51