The Destiny Series by J.M Dragon 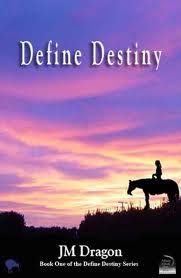 
Jace Bardley is a PA for a film producer, working for the conniving Clarissa Hudson. Jace is sent to Destiny to film a documentary. When Jace meets Catherine, it’s love at first sight for her. But the path of true love rarely runs smoothly. We see the effect of a heroic rescue by Catherine, which results in a serious injury that will affect the rest of her life.


This first book in the series takes us through the trials and tribulations of love, misunderstandings and loss. It sets the scene for the rest of the series, coming a full circle back to love and destiny for Catherine and Jace.

The second book, Haunting Shadows begins right where Define Destiny ended. Catherine and Jace are at Destiny, at last beginning their lives together with their young family. But as usually happens, nothing is going to run according to plan. In this exciting sequel we encounter murder, betrayal, kidnapping and plots to intrigue us all.


Will Catherine and Jace’s love endure? Will their lives ever be the same again?


A nail biting exciting sequel that I was unable to put down.

Book three, In Pursuit of Dreams shows us that Catherine and Jace have managed to get past the recent traumatic tragedies in their lives. It is time for them to move on with their lives together. Time for their love for one another and their extended family to shine through. They have lots to look forward to, weddings, honeymoons and reunions. But will they be able to do that if Catherine doesn’t let go of her insecurities and allow their dreams to come true?


This part of the series is what I always think of as the gentle part. Not so much excitement, but all about family and romance. A lovely gentle book.

Book four, Actions and Consequences, sees Catherine and Jace’s love and commitment to each other being tested to it’s limits. An old enemy returns and new enemies appear. The Xianthos family, their descendants and their families are all in peril. Their downfall is planned, will the plot succeed?
A kidnapping rips apart Catherine and Jace’s family. Will it rip their love apart too?


Jace goes on a mission of her own to Greece. Catherine’s aunt is in need of help. An old enemy is at large. Jace accompanied by her pregnant friend Grace arrives on the Greek island of Xianspiros, but will they succeed in preventing murder?


Another action packed, adventurous, passionate story in this continuing saga.

Book six, Two Steps Forward One Back is the penultimate book in this wonderful series. Catherine and Jace are anxiously awaiting the birth of the twins Jace is pregnant with. Amid their chaotic family life, their friend Grace is fighting for her sanity. It seems she is suffering from more than just post natal depression after the birth of her daughter. Lisa is in trouble at school, but is she the bully she is accused of being? Jace’s younger sister, Lucy, embarks on a perilous journey that will result in a series of events that will rock the foundation of her parents relationship and will impact on Catherine and Jace’s relationship too.


This book is full to overflowing with love, lies, secrets, intrigue and misunderstandings. I just couldn’t put this down until I’d turned the last page.

Book seven A World Of Change, the last in the series, begins ten years after Two Steps Forward One Back ended.


Catherine and Jace’s ideal world is in danger of total collapse. Catherine’s business is in dire trouble. She stands to lose everything, including Destiny. Money is being syphoned off from Xianthos. The IRS are involved. Will Catherine be found guilty of fraud and end up in jail? She can’t possibly tell Jace and it puts a strain on their relationship. Jace is hiding a secret herself. If Catherine finds out, it could mean the end of their relationship and their lives together.


With all the stress of keeping secrets from each other, will their love survive?

Sadly, very sadly, this is the last in this blockbuster series with all it’s endearing (and some not so endearing) characters. It’s many years since I first read about Catherine, Jace and their extended family online. These ebooks remain true to that series along with all the little quirks we see in fanfiction on the web. I was so pleased to find these books were unchanged and as I remembered them. I love this series and for old fans like myself, it was a delight to read these on my ereader in comfort.


For anyone looking for a delightful, lovable new series, I wholeheartedly recommend this one.


There is only one thing I would like to point out to any prospective new readers, there is a bit of head hopping and a few typos . This did not bother me and it certainly did not spoil my enjoyment of the story. I was only too pleased that Julie kept this series unchanged and original. I feel also that I should point out that the price of these books is very cheap for the amount of reading you get.


If Julie decides to write another big series, I’ll be first in line to buy. Thank you Julie for hours of pleasure and enjoyment.