THE SECRET OF LIGHTHOUSE POINTE by Patty G Henderson 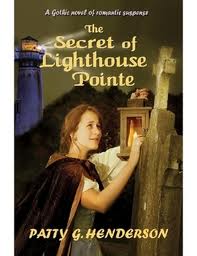 Constance Beechum is in despair. Dismissed from her job and with no means to support herself, she is considering ending her miserable life. A timely letter from her uncle with the offer of employment changes everything for her. If she takes up the offer, she will be employed as a nurse to the old and dying Lady Elizabeth Gerard at Gerard House in Castine. En route from Boston to Castine, Constance meets George Kane and considers him to be quite the dandy and very attentive to her. Why, she can't imagine.


On arrival at Gerard House, Constance meets the brothers Edward and Roger and Edward's wife, Catherine. It is clear from the outset that they do not want her there, although Roger seems to feel that Constance would make a good bed wench for himself. Constance has other ideas though and rebuffs his advances. When Constance finally meets Lady Elizabeth, they find they are well suited as employer/employee and much to the family's disgust Constance is kept on.


Constance begins to feel that the rambling old house is creepy, and starts to feel scared, then she sees lights in the Lighthouse Pointe cove, which can't be explained.


The biggest surprise to Constance is when George Kane turns out to be a close friend of Lady Elizabeth. She finds herself becoming more drawn and intrigued by him. How can that be so? Constance is a confirmed lesbian. So many questions and no answers are forthcoming. What is the secret of Lighthouse Pointe?


This book is totally different from any of Patty's previously published works. It is a historical gothic style romance set in the year 1812. Different is definitely good though. Patty has captured the whole concept of the dark brooding mansion, hero/heroine scenario, perfectly. The hairs actually rose up on the back of my neck and down my spine while reading this book. From the very first lines on the first page, I was hooked. The opening lines are hard hitting and just made me want to read on and on. As the story progressed, I felt as though I was actually a bystander observing at close quarters, rather than actually reading the book. At one point I'm sure my blood pressure rose significantly. I wanted to shout and shake one of the characters. A true sign of a good story for me to react in this way. This book contains both intrigue and romance. Once I started it, I just couldn't put it down. I hope Patty has another offering for us soon.