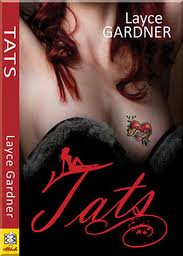 Lee Hammond has just about had enough of her stripper girlfriend Ginger. She borrows Ginger’s Harley and goes for a ride to think things through. She ends up sheltering from a thunderstorm in a cemetery and gate crashing a funeral.It’s here that Lee meets up with Vivian Baxter, an ex cheerleader from her past. Lee and Vivian ride off together and end up in the bar where Lee’s girlfriend, Ginger, works. Ginger shows up to claim her Harley back, deliver Lee’s car and to break her nose! Lee and Viv hang out together amid much hilarity and Lee discovers that Viv is on the run from some men after stealing some money. Lee has always had a fancy for Viv, but Viv is straight. But you never know, just maybe Viv can be persuaded to change teams.

If you want a book for a light hearted read and a good laugh to escape reality, you won’t get much better than Tats. There is a laugh on almost every page. Just don’t read it in public, you may be carried off! Being a Brit, I don’t always ‘get’ American humor, but this is so funny, I’m still grinning just thinking about it.