Half To Death by Robin Alexander 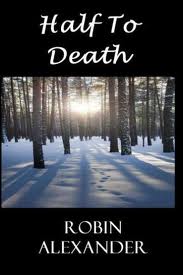 After Sloan Hawkins suffered a near death experience, her life as she knew it was never going to be the same again. For months Sloan almost drove herself insane hiding a secret so bizarre, she thought nobody would ever believe her. When Sloan finally confides in her best friend Miranda, she begins to regain her grip on her sanity once again and sees that her life maybe able to return to some semblance of normality.


Corrine Verner, (Jade) is a trainer at the gym where Sloan and Miranda work out. Sloan finds Jade attractive as soon as she meets her, but thinks she is too perfect and untouchable.


Jade herself, is hiding a secret from her past and considers herself to be unworthy of a relationship with anyone.


Will Sloan be able to resolve her issues to be able to move on with her life? Will Jade learn to trust Sloan and begin to live her life instead of just existing?


An enjoyable romance with a difference. The two main characters, Sloan and Jade, are both hiding secrets, making for a rocky beginning to a friendship, without putting a relationship into the mix. They are supported by a strong group of friends, some of whom have their own problems, which adds more to the story. But their deep friendship shines through. Another winner for Robin. The thing I like about Robin’s books, is the story lines are always so different. But there is always sweet romance.