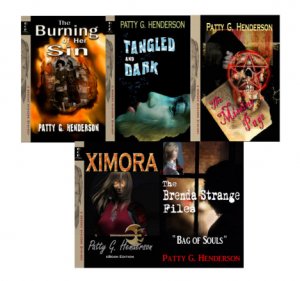 The Burning Of Her Sin The first Brenda Strange mystery


Brenda Strange has a great life, she is a Princess Diana look a like, she is wealthy and has a great job. She's a lawyer and she's just been made junior partner in an up-market New Jersey law firm. All is changed in the blink of an eye when a crazed gunman goes on a killing spree and she becomes one of the victims and is seriously injured.
Brenda is literally pulled back from deaths door after a near death experience, to find she has a strange psychic abilities.
Brenda and her lover Tina, decide to buy the old Victorian Malfour house, in Tampa, something Brenda has wanted to do for a long time. Tina hopes this will help Brenda's recuperation.
Brenda was drawn to the house from the beginning. After they move in, strange occurrences begin. Brenda finds herself listening to the screams of the past in her mind. Thus begins the beginning of Brenda’s new world. A world filled with love, curses, murders, ghosts, religion. A world in which the past and the present are woven together.


Brenda is on a mission to solve the mysteries, enter Brenda Strange Private Investigator, in her new career.
This story has so many twists, turns, ups and downs going from the past to the present, with a bit of help from beyond the grave. It will keep you enthralled, intrigued and on the edge of your seat from the first page right through to the last page. A real page turner. The characters are strong and fit well together. The writing is superb. This book is more than just a mystery. It has a touch of the paranormal, a hint of romance and is a little bit gothic. All in all a lovely combination. I read this book a while ago and had to immediately buy the rest in the series. A truly wonderful beginning to a fantastic series that will always have a place on my book shelf.

Brenda Strange, Private Investigator extraordinaire is back in the second in the series.
Brenda is called upon to investigate the death of a local business woman, Paula Drakes, who drowned while attending a party on a boat. The boat was owned by Brenda’s neighbours, Joan and Stewart. Brenda's investigation does not run smoothly. Her main suspect, Joan Davis is found dead. She has two other suspects. One is violent and could easily commit murder. The other suffers with Multiple Personality Disorder.
As well as her investigation, Brenda has to try and patch up her deteriorating relationship with her lover, Tina. Add to this trying to make things right with her mother and Brenda is almost tearing her hair out.

As if this isn't enough, there are friendly ghosts and a touch of the paranormal to keep you guessing.
Will Brenda figure out what is going on and who is the murderer before more people die? Will Brenda be able to save her relationship with Tina?
Another extremely well written psychic mystery from the pen of Patty G Henderson. The characters are well written and believable. The story so well written that I felt a part of it all.
There is so much mystery and intrigue in this book, you will not be able to put it down until you've finished it. An exciting page turner from start to finish.
The Missing Page  Book three

Brenda is coerced into taking an unusual case involving a missing manuscript.
It doesn't take long before once again, Brenda is up to her neck in mystery, murder and the paranormal. As the plot thickens, more murders occur and Brenda finds herself desperately trying to solve the case before people dear to her are murdered.


Brenda is also dealing with her mother’s death. Her client has been found decapitated and Brenda feels she owes it to him to solve the case. When the FBI get involved and the manuscript finds it’s way into Brenda’s hands, will this endanger Brenda even more?


What makes the manuscript so valuable? Why have the heads of the decapitated victims been taken? How many more victims will be found? Will Brenda solve the case before she becomes a victim herself?
As always, nothing is simple and you will be kept with the book glued to your hands until you've finished it. This book is a little shorter than the previous two in the series, but there is so much packed into it, I feel it’s quality over quantity. A roller coaster ride that you won’t be able to get off until you’ve reached the last page. Then you will want more. Be prepared for the story to shock you to the core leaving you gasping for breath. A truly unforgettable book that will stay with me for a long time to come.

Two years have passed since Brenda lost her lover Tina. She is only just beginning to overcome her grief.

When Brenda's grandmother dies, she learns a lot about her past and her own psychic powers.
Brenda is asked to take a look at a case involving a series of brutal murders that has the Tampa Police baffled. She liaises with detective Lisa Chambliss and the two women find they work quite well together. But like all Brenda Strange mysteries, nothing is simple or as it seems. Brenda has to delve into ancient myths, but even with the help of ghosts and her own psychic powers, will she be able to keep those near and dear to her safe? Or will a monster that has been on earth for hundreds of years win the battle of good versus evil? Brenda has to call upon all her psychic powers to try to win the battle.
This is yet another of Patty's books that kept me up way past bedtime. Once you start it, you will have a real problem putting it down. I hope the next Brenda Strange isn't too long arriving. I may get withdrawal symptoms.

The Brenda Strange series begins in a perfectly ordinary way. Brenda Strange is an ordinary, albeit rich, good looking and successful junior partner in a top notch law firm. Then Brenda gets shot and left for dead. This is where these mystery stories stop being ordinary. Now we have Brenda coming back from a near death experience with psychic powers that she cannot explain.

The series goes on with Brenda as a Psychic Private Investigator getting involved with both the living and the dead solving cases for the good of mankind and the supernatural and ridding the world of evil.
This is a wonderfully written series from the pen of a very talented writer. The characters are well formed, the lovable characters could be friends you mix with everyday. The nasty characters you simply love to hate.
Each book seamlessly carries on from it’s predecessor, but each book can be read as a standalone. To enjoy the series to it’s fullest I would recommend starting from the beginning. These books are too good to miss any of the action. If you only buy one mystery series this year, make it this one. It has something for everyone. Mystery, a touch of romance, intrigue, excitement, and supernatural beings and experiences. A real winner.
The whole series is consistently good throughout and in my opinion would make good films or a TV series.
I’m hoping that there will be another delightful Brenda Strange book soon.