Holding On To Faith by Joy Argento 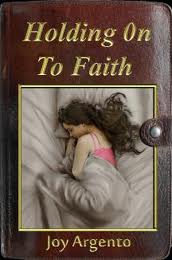 Devout Christian, Faith Hughes, had never given a thought to being attracted to another woman. Not until she met Sami Everette.


Faith and Sami began sharing Sami’s house as roommates only. However, it isn’t long before there is a mutual attraction between the two women.


Faith is consumed with guilt. Loving another woman goes against everything she has been brought up to believe. The church has made it abundantly clear, that homosexuality will send a person straight to hell. Even worse than Faith herself going to hell, is the thought that she will be responsible for Sami going to hell too.


Faith takes the only way out she feels she can take at the time. She can’t find any way to have the woman she loves and remain true to her beliefs and have the love of God, or can she?


This book is centered around religion, the church and love. It covers a lot of ground. Faith’s beliefs and Christian upbringing, the church Faith joins when she is an adult and the homophobic attitude of the Pastor. Which all influences Faith’s decisions.


When Faith makes the only choice she feels she can make, I felt the angst radiate off the page. I wanted to get hold of Faith and shake some sense in to her.


Sami is also religious and a church goer, but she is more open minded. She tries to research homosexuality and the Bible. Unfortunately, Faith is too close minded to listen. So, their fledgling relationship must end. Will Faith change her mind? Will Sami be able to at least get Faith to listen before it’s too late and their lives are changed forever?


I am not religious, so I don’t have a clue about the teachings of any particular church. But I have to say, if this story is true as to what is actually happening in some churches, thank goodness I’m not religious. The story was well written and although not my usual type of story, I did enjoy it.


I have to confess to feeling like slapping Faith on more than one occasion. I found her character most irritating. I really couldn’t feel any sympathy with her at all. Instead of feeling like I wanted her and Sami to get back together, I found myself thinking that Sami would be better off with out her. Faith broke more than one heart. I don’t want to include spoilers, so I won’t say anymore. I know it wasn’t entirely her fault, but I felt she was weak.


To sum up, on the whole the book was good. You don’t have to be religious to enjoy it. Once I started it, I had to stay up until I finished it.


I look forward to more from Joy Argento very soon.
Posted by Terry at 10:42