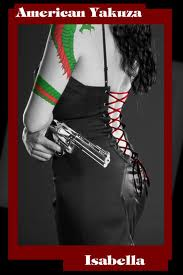 Luce Potter is the head of the American Yakuza. She has to juggle living with family ideals, honor and duty. She was given the prestigious, coveted position by her grandfather, Tamiko Yoshida, oyabun of the clan, when he stepped down. There are some men however, that don’t agree with a woman taking this position of power. Why should they listen to a woman? Will Luce gain their respect?


Luce is also the owner of Kaida Enterprises. She is rich, successful and much sort after as a catch by many women, both gay and straight.


Brooke Erikson is a reporter for the Financial Times newspaper. She is given an assignment to interview Luce. Unfortunately, Brooke has already had a run in with Luce, literally. What will happen when Luce and Brooke meet again?


When Brooke researches Luce and Kaida Enterprises, she becomes determined to find out what makes Luce the woman she is today. It’s rumored that Luce is into organized crime. What will Brooke find out?


As soon as I opened this book and read the opening sentence:- ‘A razor sharp stiletto buried between his eyes.’ My attention was grabbed. I immediately had to begin reading the story, even though I was just checking the book was on my ereader and displayed correctly.


Isabella has obviously done plenty of research. I had no idea what the Yakuza was. So, I checked it out. I think Isabella has done a perfect job of writing about the Yakuza in America.


The two main characters, Luce and Brooke interact really well together. It’s great to see how Brooke begins to chip away at the hard shell that Luce displays for the world. These two characters interact so well together, it’s like watching a synchronized dance.


The supporting characters, whether goodies or baddies are all essential and playing their roles perfectly to progress the story along.


The story is exciting and thrilling. There are lots of has twists and turns to throw the reader off the scent of the truth. There is so much packed into this book. Isabella has excelled herself once again with her storytelling and writing.


As with all of Isabella’s books, I couldn’t turn the pages fast enough. Although I slowed myself down, I still managed to read this in one long sitting. I have since read it again to savor it.


This book does conclude, no nasty cliff-hanger, but there is an opening for a sequel, which I am pleased to note is in the pipeline. I hope we don’t have to wait too long.