Worth Dying For by Trin Denise 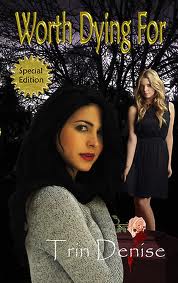 FBI Special Agent Rheyna Sorento gets the assignment of her dreams. The big one she’s always wanted. Rheyna is to go undercover to try to infiltrate the Castrucci family. Big Tony Castrucci is rumored to be next in line to become the next mob under boss.


The assignment is one of the most dangerous to be undertaken by the FBI. Three government agents so far have been killed, all connected to the Massino crime family.


Rheyna uses the friendship of Caroline, big Tony’s daughter to get close to the family.


Several months pass, more deaths and many more hours spent on surveillance and still the FBI are no nearer to making any arrests. Just when they think they have solved the government leaks, so they realize they have the wrong person. The government informer is still out there leaking information. Will Rheyna’s cover be blown?


Rheyna is fighting an attraction to Caroline. Apart from putting the whole team and operation in jeopardy, Caroline is straight, isn’t she? It’s not long before Rheyna realizes she is hopelessly in love with Caroline. Could it be from the little flirtations from Caroline, that she feels the same? Even so, Rheyna can’t act on her feelings, can she?


Things come to a head when the government informant gives Rheyna up to big Tony. This sets off a chain of events, destruction and devastation that shocks even hardened FBI agents and mobsters alike. At the end of all these events, we find out the true hero.


Rheyna’s answer to the question, ‘is this worth dying for’? Costs her more than she ever thought possible and in doing so, changes her life for ever.


This is the first book I’ve read by Trin Denise. It most certainly will not be my last. Right from the very first page through to the last page, this book had me on the edge of my seat. It’s one of the books where I wanted to rush, I had to find out what was going to happen next, but also, I didn’t want to miss a single thing. So, I forced myself to read slowly and savor each and every word.


The story is gripping, well written and there are so many twists and turns, ups and downs, I didn’t know if I was on a rollercoaster or a carousel or both. The book is simply amazing.


The characters are well formed and interact wonderfully with each other throughout. The story seamlessly flows along and the tension and suspense are almost deliciously unbearable.


I loved the easy rapport between Rheyna and her friends. The developing romantic feelings between Rheyna and Caroline were well paced and although they play a cat and mouse game, it all adds to the excitement and enjoyment of what is a suspenseful and thrilling story.


I won’t say any more about the story as I don’t want to include any spoilers. But I will say, I didn’t see the the twist at the end coming at all. Very cleverly done.


If you like thrilling, suspenseful lesbian romance, look no further. Give Worth Dying For a try, you won’t regret it. This is on my to be read again shelf.
Posted by Terry at 16:44