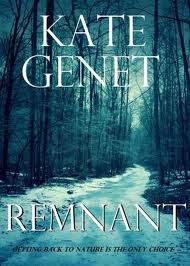 Cass is enjoying a vacation at the family home of her boyfriend, Hemi. One morning she wakes up alone. No Hemi, no anyone else either. This is the day Cass’s world changes forever.


As Cass realizes nothing feels right, she becomes aware that the only other living creatures around are birds and a horse that she names Ezzy. Cass is in total shock.


Eventually Cass becomes restless and her thinking is, if she survived, maybe someone else did too. So, she sets out with Ezzy in a search for other survivors.


Pania, another young woman, is camping out in Auckland. She is also a lone survivor. One day a horse turns up, saddled, so Pania goes in search of it’s owner. She finds Cass, who has injured herself. The two women are so pleased they now have each other. They bond right away. Maybe there is even a chance of love again.


But, there is something out there, it is watching them from the trees. Will this thing, whatever it is, leave them to enjoy life together?


This book captured my interest right from the first page. It’s well written and a page turner. If you like futuristic sci fi, you will love this. It is different from any other book in the genre that I’ve ever read.


The story centers on Cass and is told from her point of view throughout. I loved the conversations between Cass and Ezzy the horse. It’s almost like Ezzy is human in her responses.


I think Kate Genet is very clever in the way she wrote this book, each and every word is essential to progressing the story forward. It is written in such a way that she makes her reader feel as though they are living the story alongside of the characters.


The story is fast paced, even though the first part is solely about Cass and her survival, followed by her search for others. I was kept in a constant state of anxiety to know what would happen next. The dark, brooding atmosphere and sense of foreboding really keeps the pulses racing.


This is a story about the end of mankind as we know it. It’s also a story of survival and new beginnings. The book ended far too soon for me. I would like to have read more about Cass and Pania’s lives after a life changing event occurred. But the book jumped forward eight years. Having said that, the story does actually conclude nicely.


This is the first book I’ve read by Kate Genet, now I’m hooked and have to buy more.
Posted by Terry at 09:35