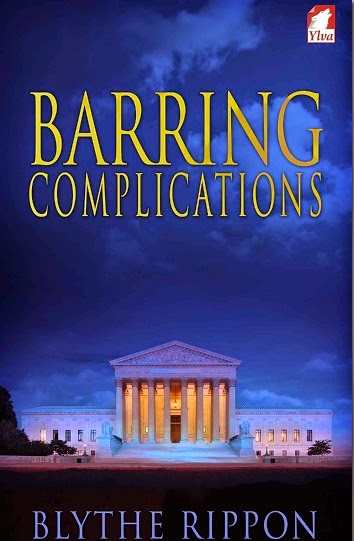 Justice Victoria Willoughby is the newest Justice on the Supreme Court. It’s also an open secret that she’s also a lesbian.


The court is about to hear a case about gay marriage. So Victoria must deal with the press, persuade one of her colleagues to back it and come to terms with her own feelings about coming out of the closet.


Victoria finally finds the courage to face the challenges ahead, only to find that Genevieve Fornier is the lead Counsel on the case.


Victoria hasn’t spoken to Genevieve in over twenty years. She’s dreading the thought of their meeting again.


Genevieve has led an open life as an out lesbian. Quite the opposite of Victoria’s closeted life. When she finds out Victoria is going to be sitting on the bench, she wonders how she will feel after not speaking to her in over twenty years.


This is Blythe Rippon’s debut book. I was a bit wary of whether I would like and be able to understand this political intrigue/romance story as it’s all about DOMA and basically legalizing marriage in America and I’m British. I needn’t have been concerned, it’s an excellent story, very easy to understand and get into whatever country you live in.


The book is well written, well edited and a page turner. There is a delicious romance simmering away in the background in amongst the politics and court appearances. Blythe Rippon has obviously done extensive research too. There is a lot packed into this book, including homophobia, stalking, a touch of violence and heartache.


The two main characters, Victoria and Genevieve are both powerful and strong women, both at the top end of their careers. They have history between them and issues that have to be resolved before they can move forward on the path of being acquaintances, let alone friends or even anything more. It’s their journey that makes this book the page turner it is.


Both Victoria and Genevieve are multidimensional, they are bolstered by a wealth of secondary characters each one playing their own significant part to progress the story forward.


The book goes backwards and forwards between the past and the present, but it is very easy to keep track of the story.


It’s very hard to believe that this is a debut book, it most certainly doesn’t read like one. I’m looking forward to reading more from Blythe Rippon in the near future.