Cowgirl Up by Ali Spooner 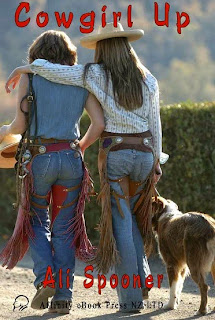 Ex army ranger, Coal Bryan, returns to Texas after her lover Tessa and friend Mitch were both killed in Afghanistan. She ends up working and living on the farm belonging to Melissa, the wife of Mitch, Coal had no idea who Melissa was, her arrival on the farm was pure fate. So it was a great shock to see photos she’d taken in Afghanistan of Tessa and Mitch on display in Melissa’s living room.


Coal is still hurting and fighting off the ravages of being at war and the loss of the love of her life and her best friend. She throws herself into the hard work on the farm and fits right in with the rest of the all male crew and soon earns the respect of the men. Coal, Melissa and the crew are as tight knit as any regular family.


When Melissa’s sister, Mary Leah, a cancer survivor, arrives on the farm to stay after a traumatic break up with her lover, sparks begin to ignite between her and Coal. Is it possible for Coal and Mary Leah to move on and find love again with each other? Both women have baggage. Both women have their own demons to overcome.


A beautiful, poignant story about love, survival and second chances. A story that sympathetically and tenderly deals with the aftermath of the devastating  destruction caused by a bomb in Afghanistan, the PTSD Coal suffers afterwards and Mary Leah’s triumphant comeback from her traumatic cancer surgery and subsequent chemotherapy treatments.


Both Coal and Mary Leah have been badly hurt and are desperately trying to overcome their pain. Together they both stand more chance of healing and finding the happiness they both deserve. These two wonderful characters are so realistically  written, I feel that I know them well. The scenery is so perfectly described, I felt like I was actually watching a film. Ali Spooner is a natural for showing the reader rather than telling them. I could almost smell the horses, the scent of the rodeo and feel the Texas heat.


Both Coal and Mary Leah have many sides to them and are backed up by a cast of excellent characters to take the story forward to it’s satisfactory conclusion. Having said that, I feel this could be a great series. These characters have a lot more to tell us and are too nice not to see again.


This book started out as a novella, so anyone who thinks they may have read it would be half right. This is now a full length book with lots more added and a page turner right the way through.


As always when I’ve finished an Ali Spooner book, I eagerly await her next one.